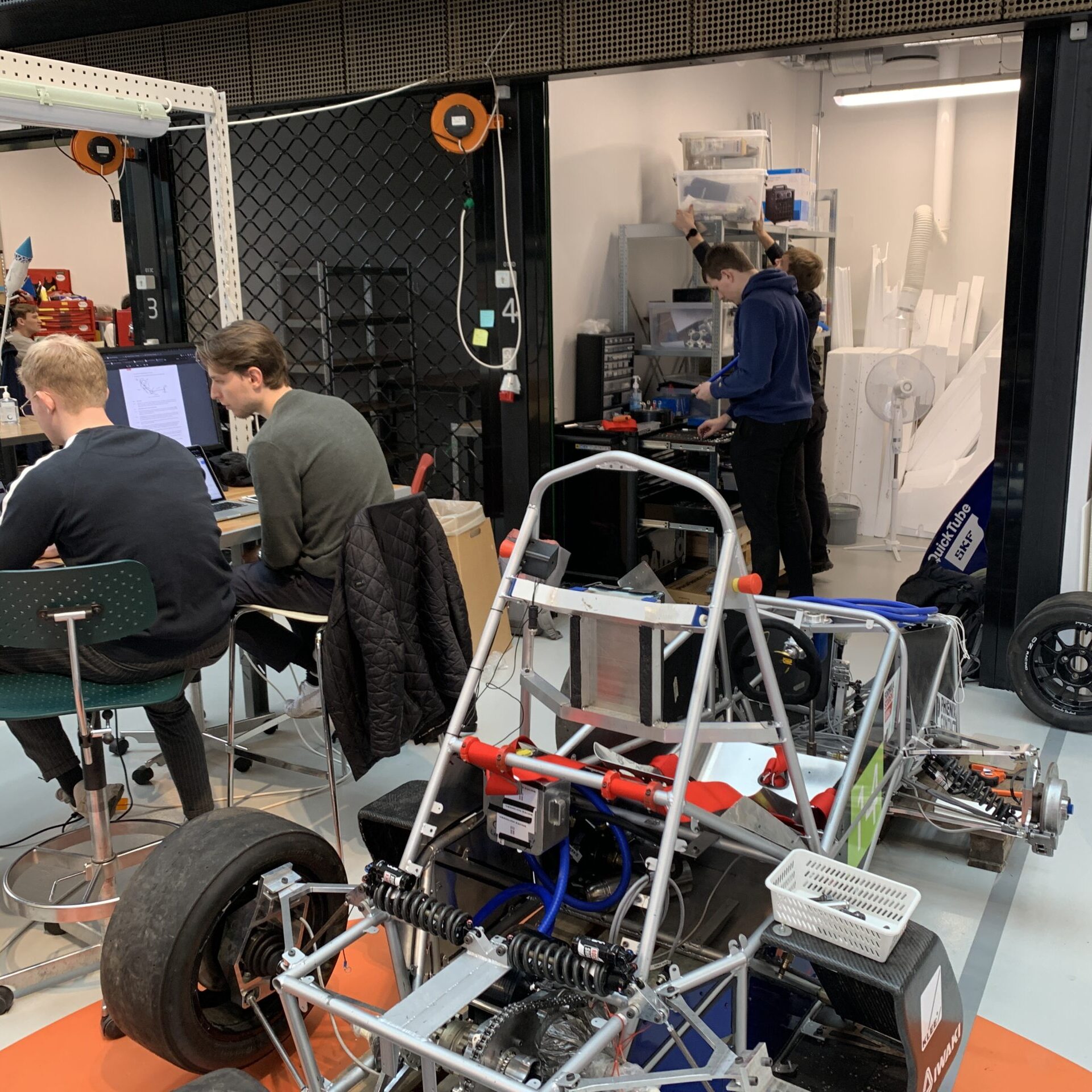 Last year, the front hood of the car was made of a thermoplast in about 2 hours late at night. This resulted in some very crude panels that lacked a lot of aesthetics as you can see in the photo below.

The front hood was spray painted and hand cut, and forced around the suspension points. This gave quite an unprofessional look, which we are trying to combat this year. The reason the front hood can be removed, is to allow the judges to inspect the pedal setup and ensure the structural integrity of the chassis.

Taking these lessons in, we decided to go with an alternative design for the 2019 car. Below is the design of the front hood, which looks slightly different from last year:

As it can be seen, the front hood does not cover the entirety of the front. Instead, it covers the impact attenuator placed at the tip, the top of the car and around the frontal sides. The rest of the front will have a spiderweb configuration, placing carbon fiber sheets in between the chassis frame. By doing this, the front hood can easily be removed while exposing the impact attenuator, pedal box and  chassis as the competition requires. Plus, it makes mounting of the side panels much, much easier and less cumbersome. The final design proposal can be seen below, where we also slapped a sticker on from our main sponsor ;-).

The design is still open to interpretation, but this gives a very good gist of how the bodypanel assembly will be.

Due to budget constraints, our team does not have several tens of thousands DKK to spend on an expensive female mould every year. Therefore, we had to go with a male mould made out of polystyrene blocks – much cheaper, but less precise. The carbon fiber layup was coordinated with DTU Risø, which has a fiber laboratory specialised in high-end wind turbine blades.

The innovation hub Skylab at DTU helped out with making the CAM program, and then had a robotic arm mill the mould in two halves:

Post milling, the halves were glued together and sanded by hand to create the final male mould which we would go on to use:

As the mould is made of polystyrene, it was not possible to cast directly on the mould without the amount of epoxy becoming incredibly large. This is due to cavities in the mould, the fact that the foam can absorb quite a lot of epoxy, and the fact that large amounts of epoxy generate large amounts of heat. Heat generation from the epoxy is enough to surpass the 60°C  polystyrene blocks are rated to, if the polystyrene is allowed to absorb more epoxy than necessary. This was tested on small square blocks, and as seen below the foam collapsed under the heat:

Therefore, the moulds are wrapped in a thin plastic foil, which also acts as a slip agent for easier removal after curing:

After putting on the slip foil, a dry layup of 160g/m² carbon fiber was performed. Six layers were cut after a template, hand laid and glued in specific places to keep the shape of the front hood as close to the CAD design as possible. One of the major issues with a male mould, is that fibers tend to take the shortest path, and not necessarily the one designed. This can be seen below in the figure to the left.

The last layer added is a mixture of hole-foil, which lets the epoxy seep into the peel-ply and further down into the carbon fiber, and a distribution medium. The distribution medium lets the epoxy flow (almost) freely in the vacuum sealed bag. If the epoxy was to just run in the fiber, the penetration time would increase greatly. The blue sheet below is the hole-foil/distribution medium on the mould. The work-time with the epoxy is only around 40 minutes,  and a maximum distance between inlet and outlet is optimally only around 40 cm. In order to accommodate this, a spiral chord was laid around the edges, allowing the epoxy to flow with less resistance and closer to the outlet.

The outlet is seen in the photo to the right as a white strip with a T-piece at the tip. This T-piece is connected through the vacuum bag to a vacuum pump, where an only-peel-ply brake is all around the outlet. The brake lets the epoxy run through all of the distribution medium, before attempting to penetrate the difficult peel-ply.

Below is the vacuum bagged mould, where a slight vacuum has been sucked to check for leaks. Making sure nothing is leaking, is important to ensure the quality of the carbon fiber as the mould will have to stand alone over the night. The white band across the back is an even better distribution medium strip, which lets the epoxy flow much, much faster.

After ensuring the mould is completely sealed, infusion begins. Below is a picture during infusion. The peel-ply and distribution medium becomes transparent when soaked, thus becoming black when the carbon fiber has been infused with epoxy. As it can be seen, the epoxy is spread rapidly around the white band-channels, and moves slower the further away the inlet is. The infusion process takes about 45 minutes, and in the picture to the right it can be seen how progress is tracked. A green highlighter is used to mark the progress of the epoxy, along with a timestamp.

Sadly, the epoxy could not penetrate the brake at the tip of the front hood. This left a dry spot, which had to be hand-painted with epoxy afterwards. As we used vacuum infusion on a male mould, some of the edges are sticking out slightly. This can be seen as the vein-y looks on the front of the nose. These will have to be hand-sanded, and then a hand-layup has to be done on the inside.

I would like to say thanks to Malthe Markussen at DTU Risø for teaching us the methods, and to Martin Meister and his crew at DTU Skylab.